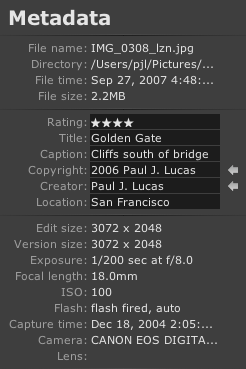 Metadata is data about a photo, such as its dimensions and file size, as well as the digital camera used to take the photo, such as the make and model, lens, ISO setting, and shutter speed.

Additionally, metadata can also include information about the content of a photo such as its title, caption, copyright, creator, and location. (Such metadata is known as IPTC metadata.)

On the right side of the browser window is the Metadata Inspector that shows the selected photo’s metadata. You can edit metadata that has a dark gray background. (Editing metadata is not available in LightZone Basic.)

To display the metadata for a photo:

To edit the metadata for a photo: