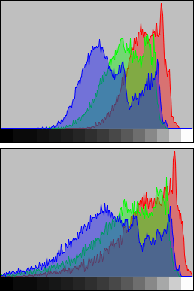 Sharing space with the ZoneFinder, Color Selection Viewer, and Sampler in the upper-right corner of the LightZone window is also the histogram that shows the distribution of intensity for each of the red, green, and blue color channels.

The histogram in the lower right shows the same photo after both exposure and black point adjustments have been made using the ZoneMapper tool. Notice how the color channels now extend all the way from the darkest zone to the lightest.

To show the histogram: