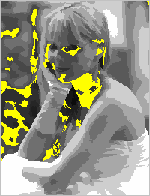 Using a ZoneMapper tool with the ZoneFinder allows you to find zones in your photo quickly in order to make adjustments.

For example, you can quickly find both the white and black points in your photo allowing you to fix the exposure and get deeper blacks.

To find zones on your photo: