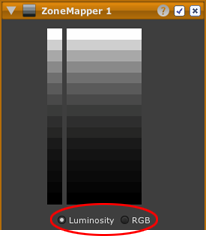 Each pixel in a digital photo is comprised of red, green, and blue (RGB) values. A pixel’s luminosity (“brightness”) value is a weighted average of those three values.

Normally, adjustments using a ZoneMapper are done using luminosity values because there are virtually no unintended hue or saturation changes.

However, on occasion, luminosity-based adjustments can result in problems such as color-clipping. For example, if your photo has saturated highlights such as a clear blue sky, then increasing brightness will clip colors in portions of the sky because pixels that are already saturated blue can’t become more blue.

Adjustments using the ZoneMapper can alternatively be done using RGB values directly to address problems such as color-clipping. For a given photo, it’s best to experiment to see which type of adjustment looks better.

To make RGB rather than luminosity adjustments: